Learn how to make the ultimate party appetizer. It is a make-head, super easy shrimp cocktail. You’re gonna love this sauce.

It is the perfect make-ahead appetizer, and this literally takes like 15 minutes.

It is so fast, easy, absolutely delicious, and I hope this becomes your new favourite shrimp cocktail.

So delicious. Make this for your next party, and it will disappear fast.

How To Make The Best Oven-baked Shrimp Cocktail:

You need two pounds of peeled and deveined fully thawed shrimp with the tails still on.

Give it a quick rinse under cold water, then, thoroughly pat dry with paper towels.

You will need to make sure there’s no excess water on the shrimp.

If you can find shrimp that are already peeled, that’s even better because it cuts the prep time in half.

Give the shrimp a quick toss to combine, then, spread them in an even single layer on your pan.

Now bake them in the centre of a fully preheated oven at 450 degrees Fahrenheit.

Take them out of the oven when they’re just cooked through and they’ve turned pink.

As soon as they come outta the oven, you wanna carefully transfer them right away to a serving platter.

Make sure to get them off of the baking sheet because if they sit on a hot baking sheet, they can overcook.

Set the shrimp aside to cool to room temperature.

Next, add three to four tablespoons of prepared horseradish. The horseradish does give it a nice spicy kick, so add this to taste.

Next, add 1 1/2 tablespoons of freshly squeezed lemon juice. And if you don’t have a good lemon squeezer, you’ll love this one.

Stir everything together to combine, and the sauce will taste pretty spicy at this point, but keep in mind, you wanna refrigerate that sauce for at least an hour and give the flavours a chance to meld and mellow out.

Transfer the sauce to a serving dish, then, cover the sauce and the shrimp and you wanna refrigerate that for at least an hour or overnight.

This is completely a make-ahead recipe. The shrimp and the sauce taste best when they are fully chilled, so keep it in the refrigerator until ready to serve.

The shrimp is nicely chilled, and you wanna make sure that you let that sauce rest at least an hour.

I think it tastes even better the next day because the flavours meld.

to serve, I love adding some lemon wedges so people can squeeze fresh lemon juice over their shrimp. So I have a trick.

Squeeze some fresh lemon juice right over your shrimp.

That combination of flavours in the cocktail sauce, it is the perfect balance of tangy and spicy. You’ve got a little bit of kick from the horseradish sauce and the hot sauce, and you can add those to taste.

Also, when you roast shrimp, it’s so much more flavorful than boiling because the store-bought cocktail rings, that’s usually boiled shrimp.

just this naturally sweet, roasted flavour in it. Anytime you roast any kind of meat or seafood, it always tastes better. 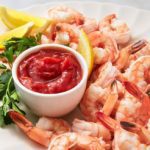 This homemade Shrimp Cocktail is a healthy and flavorful dish and ready in less than 20 minutes. It's so much better than a store-bought shrimp ring.