Make The classic shepherd’s pie recipe is layered with minced meat and veggies on the bottom in a savoury rich sauce and topped with a light and fluffy mashed potatoes on top that forms a delicious crust.

we’ll keep this recipe pretty close to the traditional Irish version but I’ll also give you some tips and variations to make this recipe low-carb, keto and vegan-friendly. 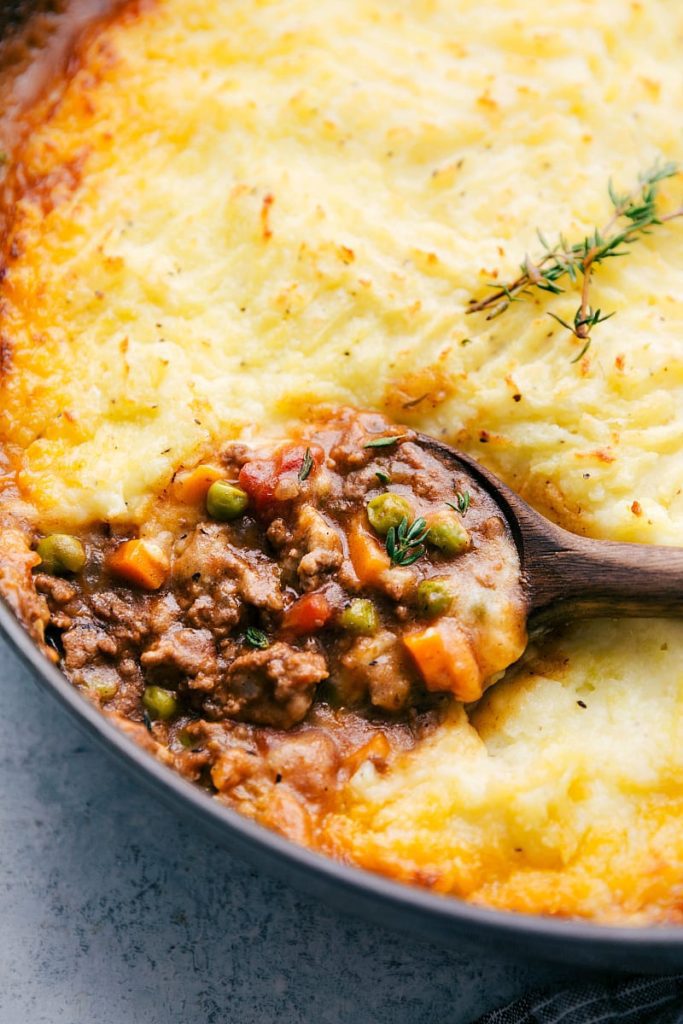 Image by Chelsea via Chelseasmessyapron

How To Make Shepherd’s pie:

peel and quarter two pounds of russet potatoes, which is about three potatoes.

If your potatoes are larger, you can cut them into chunks rather than quarters and they’ll cook a little faster, as well.

I’m using russet potatoes as it’s more classic, but you could use sweet potatoes for a vibrant orange topping or even cauliflower for a low-carb mashed cauliflower topping.

Add the potato chunks to a pot and fill it with cold water until they’re just covered. Turn the heat to high and bring the water to a boil.

Then, set a timer and cook the potatoes for about 13 to 15 minutes.

While the potatoes are cooking, add half a cup of milk to a small pot and you could use non-dairy milk, as well, along with half a cup of butter or ghee.

Then, warm this up until it’s melted. When the potatoes are done, they’ll be soft when pierced with a fork.

Drain the potatoes in a colander and then return them to the pot to save getting another bowl dirty.

If you are serving these up as a simple mashed potatoes side dish, returning them to the hot pot also keeps the potatoes warm.

Add the melted butter and milk along with salt and pepper to the mashed potatoes and use a handheld masher to mash them up until they’re nice and fluffy.

If they’re too stiff, you can always more milk to get a fluffier consistency.

Once you’re done mashing, set these aside and we’ll get started on the meat and veggie filling.

Preheat your oven to 400 degrees Fahrenheit. Then, peel and finally dice two carrots.

And I’m using my favourite Y Peeler. To create a small dice on the carrots, just trim off the ends and then slice each carrot in half and then into thin strips lengthwise.

Then, all you have to do is cut across for the perfect small dice.

If your carrots are long, you can cut them in half first then half lengthwise to make them easier to cut into strips.

Next, we’ll dice up two stalks of celery. I think many shepherd’s pie recipes only call for one stalk of celery, but you know the more veggies the better.

Trim the ends off the celery, slice them into strips lengthwise.

The last veggie we’ll dice up is a yellow onion.

Add two tablespoons of olive oil to a pan on medium heat and add the diced onion.

Then, mince two garlic cloves and saute that together with the onion for a minute or so.

Add the diced carrots, diced celery, and one and a half pounds of ground lamb to the pan.

Ground lamb is what’s traditionally used in shepherd’s pie, though often in the US you’ll find ground beef used instead.

If you do that, it’s called a cottage pie and not a shepherd’s pie.

If you don’t eat a lot of lambs, I say give the original version a try. I think you’ll love it.

If you’re vegan or vegetarian, you could also swap a mix of mushrooms and lentils for the meat.

So, cook the lamb and veggies for about eight to 10 minutes or until the meat is browned, making sure to break it up with your spatula.

Some fat may accumulate in the bottom of the pan and you’ll want to drain that off. So what I do is add a lid, take it over to the sink, and pour it off.

Next, you’ll add one cup of chicken broth, one and a half tablespoons of tomato paste, and this is what helps to thicken up our sauce and add flavour without the need for any flour, and one tablespoon of Worcestershire sauce.

If you’re gluten-free, you do need to be extra careful which brand of Worcestershire sauce you buy.

Quickly chop up some fresh rosemary and thyme and add that to the pan, along with salt and pepper.

In a pinch, you could use dried spices as well, though I prefer fresh in this recipe.

Stir and simmer these ingredients together for about five minutes or until the sauce has thickened up.

Our last ingredient is one cup of frozen peas.

So add that to the pan, stir it, turn off your stove, and then flatten the meat mixture down with the back of your spatula.

Dollop the mashed potatoes on top of the meat mixture and use a spoon or spatula to spread it flat to the edges.

You do wanna go all the way to the edges with the mashed potatoes to form a seal across the top and prevent the sauce from boiling up.

If you’d like, you could use the back of your spoon or a fork to create a texture in the topping, as well.

Bake the shepherd’s pie for 25 to 30 minutes. It should be slightly golden on top though you could always turn on the top broiler for a minute or two, as well.

When you take it out of the oven, it will smell amazing and the mashed potato topping will have formed this beautiful crust. favourite

Before serving, add a little sprinkle of fresh parsley and then I’ll scoop out a generous portion on each plate. favourite

This savoury comfort food recipe is perfect for the colder months and always seems to get gobbled up fast so I’m confident you’re gonna love it, as well. 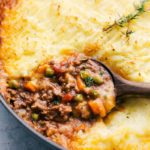 How to make Swiss Meringue Buttercream