I’m sharing with you how to make the silkiest Swiss Meringue Buttercream you’ve ever tasted. It’s perfect for making layer cakes and pipes beautifully onto your cupcakes.

Swiss Meringue buttercream is a little more involved to make than traditional American style buttercream, both have their pros and cons and many people will have their favourite.

Swiss Meringue is a more delicate, silky and much less sweet buttercream so to me it works best with flavours like vanilla where as well as the flavour you want a really beautiful texture to add to the cake or cupcakes without it being overpowering.

To start we want to separate the eggs into a heatproof bowl.

his recipe will make enough for 12 cupcakes or 1 8 inches or 6-inch layer cake. Make sure your eggs are at room temperature and place the whites in the heatproof bowl and the yolks in a separate bowl for saving for another recipe later. 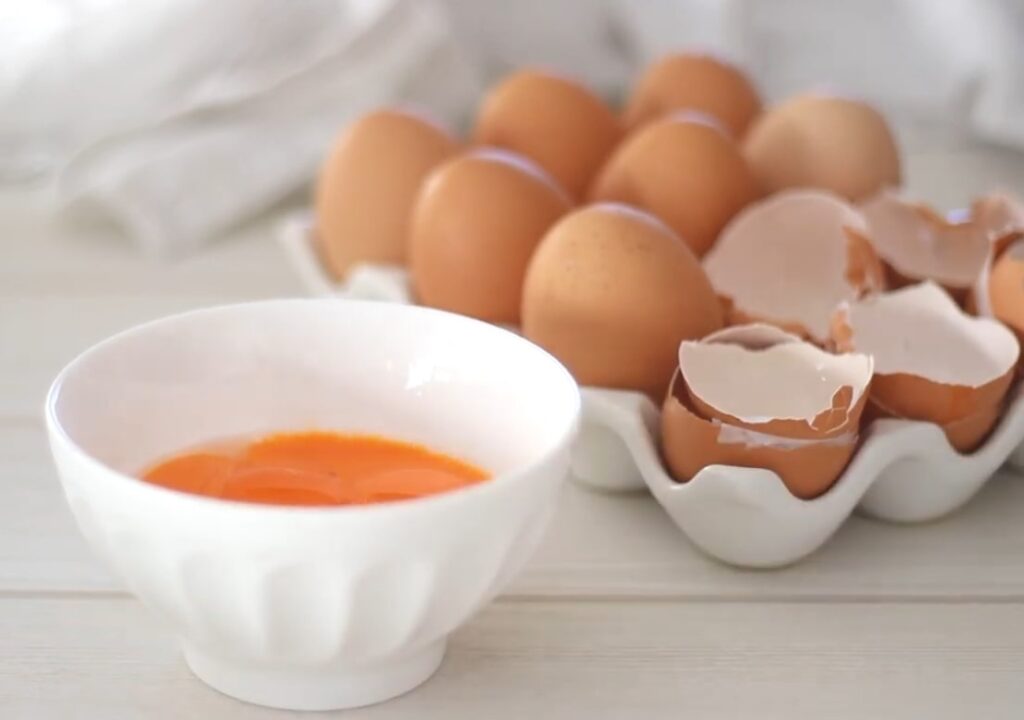 you just separating the eggs between the shells but there are many different ways to do this to make sure you don’t break the yolk. We’re going to be making meringue so one tiny bit of yolk in the whites and it just won’t whip up so make sure to be as careful as you possibly can.

Place the leftover egg yolks to the side. These will keep in the fridge for a few days so make sure not to waste them. A few recipes ideas to use them up would be lemon curd, custard, mayonnaise or hollandaise sauce or adding them to your scrambled eggs, omelette or quiche for a richer flavour.

To the five egg, whites measure out a cup and a half or 300g of white sugar. You’ll notice I give the recipe amounts in metric and imperial, cups grams and ounces so no matter where you live in the world you should find this recipe easy enough to follow.

Place the bowl of egg whites and sugar over a water bath or bain-marie which is essentially just a pot of simmering water. This provides much gentler heat so there’s no chance of over cooking the egg whites. You don’t need to worry about eating them raw here, we’re going to cook the whites to about 70 degrees Celsius or 160 degrees Fahrenheit.

Using a whisk, give them a good whisk every 30 seconds or so to make sure they’re evenly combined and the bottom isn’t getting too hot.
As it heats the mixture will completely change consistency from being incredibly thick and stringy to very thin and syrup-like.

There’s no need for a thermometer here if you don’t have one, a simple way to check is to feel a small amount of the egg white and sugar mixture between your fingers, if it’s smooth and you can’t feel the grittiness of the sugar it’s dissolved and the meringue is ready to be whipped.

The sugar dissolves at about the same temperature that the egg whites are cooked safe enough to eat raw.

To make this recipe it’s easiest to have a stand mixer as it’s hands-free but you can also make this with a hand mixer.
There’s no way you’ll be able to make this recipe by hand though as the meringue needs to be whipped for over 10 minutes and you can’t physically do that yourself at the speed a mixer can.

If you don’t have one I would recommend picking up a hand mixer, you can usually find ones that aren’t too expensive and it’ll make baking a lot easier.

Remove the egg whites and sugar from the heat and place them into the bowl of your stand mixer or the largest bowl you have if you’re using a hand mixer.

Make sure you’re using the whisk attachment here and turn the speed to low. Your meringue will be very hot at this point, it’s much easier to cool it down if you have a metal bowl as it won’t hold heat but I only have glass that fits my mixer so I’m working with that.

After a minute or so when the mixture has turned opaque white you can turn the mixer up to medium-high speed.

We want to start it off on low speed first as this creates smaller bubbles meaning your meringue is more stable, once it’s become opaque we can turn it up.

As the meringue whips check the bowl often with your hands to feel the temperature, we need it to be room temp so it definitely shouldn’t feel warm or hot. 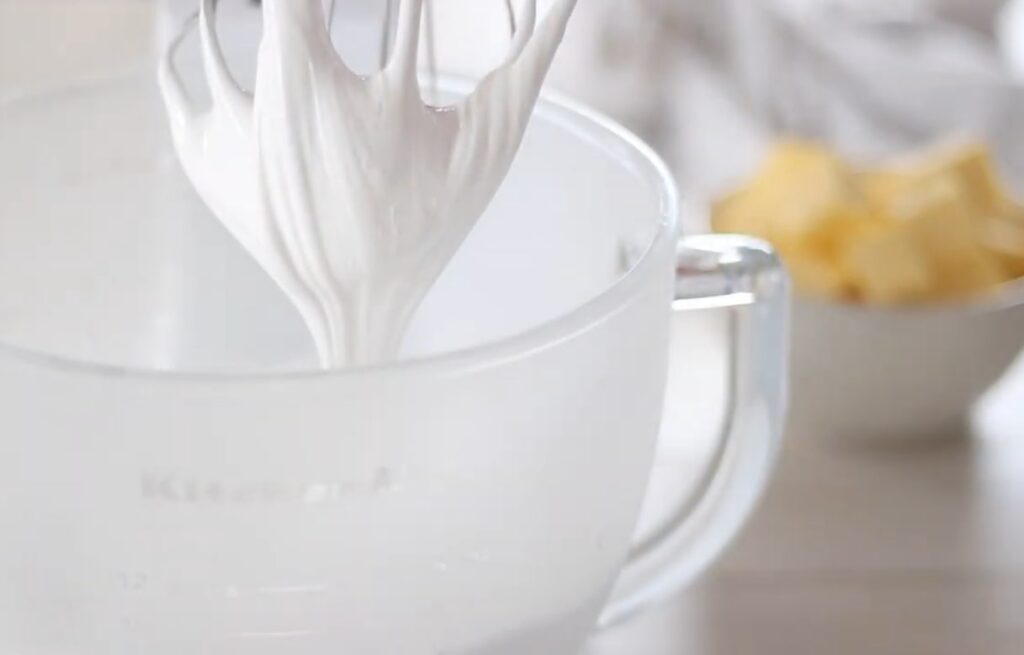 It’ll take about 10 minutes to fully whip to the stiff peak stage on a medium to high speed, as you can see here it’s bearly holding its shape and we still have a while to go.Once your meringue is at the stiff peak stage and is at room temperature we can start adding the butter.
If it’s fully whipped but still feels a little warm you can place the bowl in ice water for a few minutes and that should help a lot.

We need 1 cup, 2 stick or 225 grams or in other words a lot of butter. Make sure it’s fully at room temp here, that really important for Swiss meringue.
With the mixer on low, we’re going to start adding a little at a time. While my butter was cold I cut it up into about 1 tablespoon-sized cube which makes this part so much easier.
Make sure each piece of butter has been fully incorporated before adding the next.

It should take at least a couple of minutes to add the whole lot.
Your buttercream should become a lot thicker and depending if you have as yellow butter as we do in New Zealand, change with a tinge of yellow.

One quick tip here I have for you if you are after a more colourless or whiter buttercream is to use the smallest amount of violet coloured gel colouring, it’s the exact opposite on the colour well to yellow so it completely counteracts the colour.

At this point, there are a couple of things that can go wrong but it’s usually completely fixable. 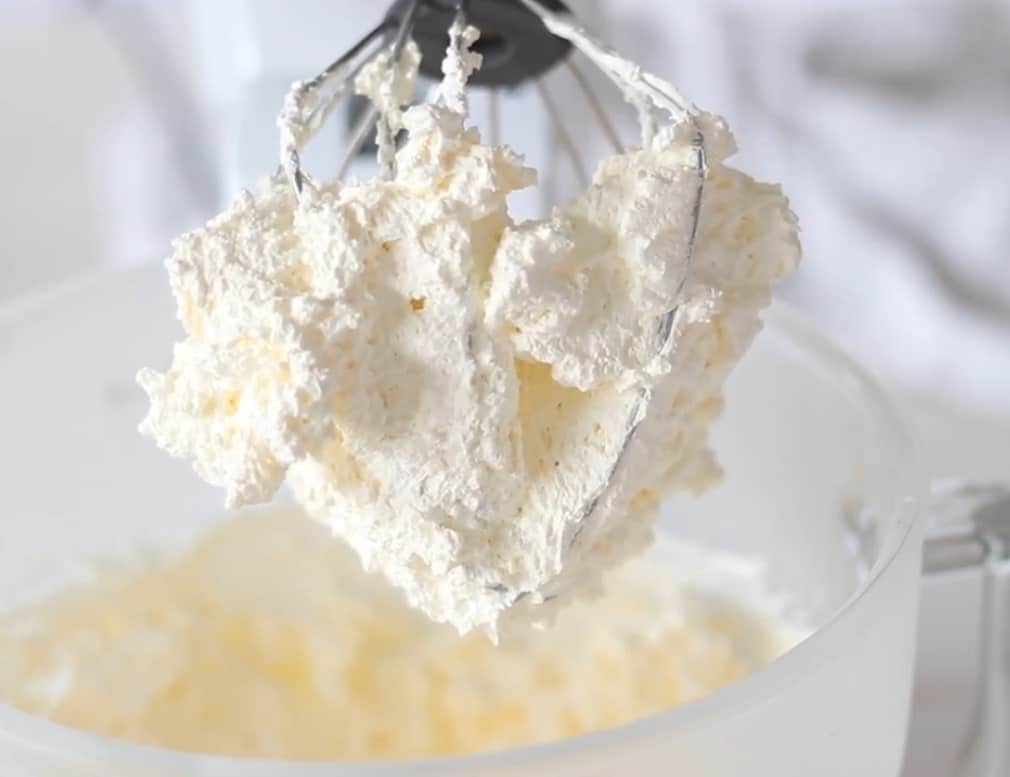 This is really common with swiss meringue and 9 times out of 10 will just be fixed by turning your machine back on to medium speed for a few minutes until it’s silky smooth.

This is usually caused by not cooling it enough before adding the butter so the butter will melt. To fix this place your bowl in the fridge for 10 to 15 minutes before whipping again until you have a really spreadable consistency.

Once your buttercream is looking pretty perfect we need some flavouring. I’m using vanilla but you can use any other type of extract, essence or zest you would like depending on what flavour of cake or cupcakes you have.

Add it to the buttercream and turn the mixer back on until fully combined. This swiss meringue buttercream is best kept in the fridge before you use it or it can be stored in the freezer for up to 3 months.

In both cases let it come back up to room temperature and whip it in your stand mixer or with hand mixer again before you use it.

I’m using mine to decorate this 3 layer vanilla cake. It’s the perfect spreadable consistency and I can use a thicker amount between the layers to get that delicious looking cake without the buttercream being far too overpowering to the cake. 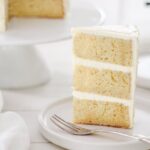 Jump to Recipe Print Recipe Learn how to make classic taco soup. Taco soup is inspired by the...

Jump to Recipe Print Recipe There is no one in the world who doesn’t love cheeseburgers, and...

Jump to Recipe Print Recipe This is 1 pot cooking at its best everything gets added in step by step...

Jump to Recipe Print Recipe If you’ve never had za’atar before, you’re in for a...