Recently, Mexican food became famous around the world. It provides a variety of delicious and healthy dishes.

Mexican cuisine is known for its simplicity, but the benefits are amazing. Whenever you don’t have time, try providing ingredients in advance, and make an easy Mexican dish.

Have you ever heard of Green Chile Chicken Enchiladas?

This healthy, delicious dish is delicious. The ingredients are simple and not expensive, and the preparation of Green Chile Chicken Enchiladas is easy.

After reading, you will discover how to make an easy Green Chile Chicken Enchiladas, what do you need to have as ingredients and some additional information about this tasty dish.

The recipe for the Green Chile Chicken Enchiladas is characterized by the use of healthy ingredients with minimal fats, salts, and sugars.

It’s better not to use a ton of cheese. You can either use canned enchilada sauce or follow this recipe to make a 10 minutes home-made salsa verde.

The first step is pre-heating the oven to 400 degrees, then greasing the 9×13 baking dish with olive oil.

Combine the salsa verde with the greek yoghurt in a kitchen blender until the mixture is smooth.

In a large pan, heat the olive oil over medium-high temperature and put the chicken in it. Season with pepper and sea salt, and cook the chicken until brown, it will take about 3 minutes per side to brown.

From the blender, pour the salsa verde over and around the chicken.

Cook the chicken through about 10 to 12 minutes. Then, remove the chicken from the sauce, and let the sauce and chicken cool.

Shred the chicken breasts with the forks, and move the shredded chicken to a large bowl.

Add a cup of Jack cheese, cilantro and half the chile Verde enchilada sauce you have on the pan, to the shredded chicken.

Combine everything and place the mixture in the centre of the tortillas, and roll up softly.

When you finish rolling the tortillas, arrange them in a pan. Coat them with olive oil if you want to prevent them from cracking in the oven.

Top with the remaining sauce and cheese, and put the pan in the oven to bake for 15 minutes.

Is it possible to use corn tortillas?

You can use whatever you want, but corn tortillas are better for Green Chile Chicken Enchiladas because they hold up better and have a good flavor.

Note that corn tortillas sometimes are dry and other times are chewy in enchiladas. Flour tortillas with minimally processed ingredients are difficult to find.

Brush the corn tortillas with olive oil in order to keep them from getting dry.

Enchiladas can last for up to 4 days in the fridge if it’s stored properly.

You can reheat the Enchiladas in the microwave or on a low heat in the oven whenever you like.

Add the cheese on the top when you reheat, and bake to reheat instead of the microwave.

Yes, you can freeze the Enchiladas, but you need to follow some steps to prevent them from getting mushy when reheated.

The first thing is letting the enchiladas to cool before wrapping and placing them in the freezer entirely. Freezing the food when it’s still hot will form ice crystals on the surface, which causes the tortillas to become mushy when you reheat them.

It’s better to wrap the individual servings in plastic freezer wrap. After that, place the wrapped enchiladas into a freezer bag.

Do not add cheese on top when freezing the enchiladas. Cheese could be added only when you reheat.

Try to freeze the enchiladas quickly to prevent them from getting mushy. Baking to reheat is better than the microwave in this situation.

Chicken enchiladas can be useful for 4-5 days if they are covered tightly in plastic wrap or stored in an airtight container in the refrigerator.

In case you smell a bad scent, toss the enchiladas away. 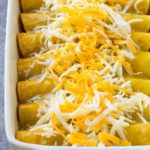 Corn tortillas stuffed with chicken, sour cream, green chiles and cheese, make one of the best Mexican dishes a healthy and delicious dish ideal for any holiday or event.

Want To Try These Green Chile Chicken Enchiladas Recipe?
Pin Them To Your Chicken Or Dinner Board To Make Later!